Culture. Roots of the old Yugoslavia. And the Pride of Montenegro

Culture.
Pride of Place: Montenegro
.
I.  Overview
.
Yugoslavia: The old union of republics in the Balkans. Brian Hall's book reflects on that union of Yugoslavia, The Impossible Country.  See 1994's notable presentation at http://www.goodreads.com/book/show/243199.The_Impossible_Country.; http://www.nytimes.com/1995/10/08/books/new-noteworthy-paperbacks-480695.html?scp=3&sq=book%20review%20%22the%20impossible%20country%22&st=cse

Those old Yugoslav nations are now independent, with a great deal of bloodshed in the separations.

A.  What are those roots.  We noted a difference in the children and adults of Montenegro:  sensing a pride of place not seen elsewhere.  How reliable is our impression? We were only there a few days.

1.  Example, spontaneity of children:  "How do you like our beautiful city?" asked children playing soccer in a small park area in Cetinje, with buildings in need of vast repair, but the architecture glowing with past political, diplomatic and other glories. They had no question but that their city was indeed beautiful still, as it is in a fading way, as anywhere with insufficient funds for repair.

2.  Undercurrent of reticence in adults.  Was this an outgrowth of the looming independence from Serbia election:  In Cetinje, waiters held back, waving off questions with nods to other parts of the restaurant where serious diners sat, so we understood the service people did not feel free to discuss independence openly.  The staff was matter-of-fact, however, not appearing cowed.   We sensed wariness, but it was not fear.  Is that worth noting?

3.  Brian Hall's book calling a union of these disparate Yugoslav parts as impossible.  How to generalize.  Impossible, with no "scientific" samplings, data, controls.

3.1  The nations involved did not share a history of independence.  Read an old article on Balkan history, from the New York Times from 1991, at http://www.nytimes.com/1991/07/06/world/conflict-in-yugoslavia-national-rivalries-cloud-dream-of-yugoslav-unity.html?scp=1&sq=David%20Binder%20July%206,%201991&st=cse.  It notes that Montenegro and Serbia were the only old Yugoslav nations that were independent before WWI.  So, Montenegro, still under Ottoman rule, as was Bulgaria, was at a disadvantage in terms of experience.  See http://alphahistory.com/worldwar1/balkans/

3.2  Montenegro, however, as part of the Ottoman Empire, still presented a difficult --literally -- terrain for anyone asserting controls.  Geographically, the mountains would create pockets for different interests to foment undisturbed. A review of the area's history is difficult before the actual visit, however, because the groups are so many, and the cultures so varied.  We are not taught much about the Balkans in our schools. After returning, it is easier to seek out sources to get a grip on the conflicts, the groups.  Places and ideas are by then familiar.  Still, in Montenegro we sensed a pride, not an undercurrent of anger.

3.3  Serbia in particular exerts a forceful sense of territory.  Serbia had also been under Ottoman rule, but in 1814ff, some parts managed to establish autonomy within the Ottoman Empire, then becoming independent in about 1878, see http://www.balkaninsight.com/en/article/the-ottomans-six-centuries-in-europe  Do people that know they were indeed independent, and have the privilege of a known past without subjugation, pass that on so that the tradition itself supports ongoing independence.  Did that help doom Yugoslavia.  Here, we offer a review of that article with our own observations so far, to be augmented.

.
II.  Balkan History:  How to get a grip.  Rebecca West's 1931 Black Lamb and Grey Falcon (as reviewed in The Guardian) is unsurpassed as a resource, context-creator.

A.  The patchwork:  Islam in the south of the Balkan peninsula, Serbia, Macedonia, Bosnia-Herzegovina; Orthodox Christianity in those areas as well, competing; and Roman Catholicism in the north, essentially.  Yugoslavia was the land of the south Slavs. It was comprised of six very different republics: Croatia, where we began, Bosnia - Herzegovina, Montenegro, Serbia (we only saw a corner because Sarajevo, where we wanted to go, was not included in our car insurance).

1. Resource.  Read old journalism piece, before the splittings apart of the last decade, at  http://www.nytimes.com/1991/07/06/world/conflict-in-yugoslavia-national-rivalries-cloud-dream-of-yugoslav-unity.html?scp=1&sq=David%20Binder%20July%206,%201991&st=cse.  Older articles often offer detail without having to reshape information to fit with current events.  Tere is an immediacy, when the stakes do not require making sense of something.

2.  Cultural background. Macedonia, that we did not see; and Slovenia.

3.  Narrowed timeline.  Before WWI, only Montenegro and Serbia were independent.

The others were part of either the Habsburg Empire, or the Ottoman.  Croatia 800 years earlier joined Hungary. The Slovenes were ruled by the Habsburgs since the 14th Century.  Croats and Slovenes enjoyed industrial development through the Habsburg connections.  Most Serbians and Macedonians remained barely subsisting as farmers.  Macedonia was Bulgarian and then Ottoman, and there were independent principalities in Bosnia-Herzegovina in the middle ages, but they fell under Turkish and later Habsburg control.  Find this history outlined at NYT Conflict in Yugoslavia cite above.

Although already having cast off the Ottoman Empire, Montenegro formally declared war upon it in 1912, see http://www.resistance100.org/1912/montenegro-declares-war-ottoman-empire


3.  The idea of the one nation for south Slavs was the product of particular intellectual and religious leaders, including the 19th Century Bishop Josop Juraj Strosmajer, Croatian, spellings vary.  As Strossmayer, also see him commemorated in Prague, Czech Republic, see http://petrginz.blogspot.com/2007/08/holesovice-petrs-home-stepaniks-bridge.html
5.  The mixmaster of those familiar with independence, and those still feeling their way.

5.1  Ethnicity. Ethnically, most of the population was Slav - say 83%, NYT July 6, 1991 article by David Binder, National Rivalries Cloud Dream of Yugoslav Unity. There were Slovaks, Bulgars, Ruthenians, Russians, Poles; as well as Albanians, Hungarians, Gypsies, Greeks, Vlachs, Jews, Tsintsars (who?) and Austrians.  Each wanted, or already had, a stake.  Serbs held most positions in the army, secret police, federal bureaucracy, thus Tito being a Croat was somewhat offset.  But the brutality modeled after Stalinism emerged.

5.2.  Religion.  Longstanding rivalries between Orthodox Christian and Roman Catholic Christians also erupted - see issues related to whether Cardinal Stepinac stepped aside as Orthodox were led to their deaths, content to try to convert them before they went; or were his hands tied, see Zagreb, Croatia, St. Stephen's Cathedral,  http://croatiaroadways.blogspot.com/search/label/St.%20Stephen%27s%20Cathedral

B.  Divisions persisted, the old Tito framework died with him.

1. How could such a patchwork of different interests possibly work together for long?  Each found some satisfaction in a new status, recognition of individuality, desire for nationhood, and these seemed to satisfy most groups.

Then emerged huge rifts among the Serbs, Slovenes and Croats - an inter-ethnic civil war.

2. Tito died in 1980, and some powers passed to the republic-areas.  But in 1987, Serbian Communist Slobodan Milosevic rallied the Serbs for a nationalist agenda  and set out to subdue (which became genocide) the Albanian population in Kosovo.  Collision course. The Communist Party collapsed in 1990, and Croatia and Slovenia pursued separatist policies. 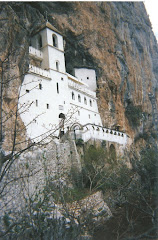